I’ve never sat down and watched a show like this before. To be honest, I didn’t think this concept would work at all when it comes to the rules of the household. The way it works is that contestants are unable to see each other and communicate with each other through the wall. Contestants must rely on building a relationship and or getting to know the person on a deeper level which I personally find better.  I’ve only watched the first episode and I found it very cool, emotional, annoying and exciting wrapped all in one.

So far my favorite couple would be Cameron and Lauren. From the moment they encountered each other and continued to build I already felt a connection between the both of them. Aside from the obvious that they are both from different races, YES there are many things that they have in common which wouldn’t necessarily be a barrier between two people who truly feel that they are in love. 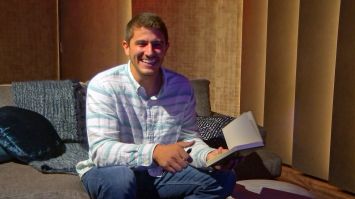 This guy to the right is Barnett. Very cool guy, slick and can appear straight forward as an individual. The white women in the household seem to take a liking to him and its obvious that he knows it as well. To me he holds the keys to these women’s heart lol so he can choose who he feels, but again to ME he comes across as a player but who am I to throw salt on a fellow man’s game right? In any case just by looking at the other characters like Jessica the 34 year old woman who doesn’t know what she wants and is playing games with Mark to Diamond the stripper having feelings towards the bisexual church boy Carlton the show has a lot to offer.

The issue that I have with this episode was at the end when they gave us a preview for what to expect next. I hate….I HATE that shit. Especially when I saw the part where I saw potentially Lauren’s dad barking or some bullshit about being with white men….I hate to hear and see that shit because we should look beyond this white and black shit and simply stick to being a human, our differences in personalities and get away from these idiotic stereotypes.

Why Do Black People Have This Sense Of Entitlement?