We all talk about it.  We scream at the top of our lungs when we are in our vehicle hoping that they hear us through the glass saying “WHO GAVE YOU YOUR DAMN LICENSE” or ” ARE YOU BLIND? YOU CAN’T SEE THE GREEN LIGHT?“. We see it when we walk down the street with our peoples/friends; they are driving slow as hell, or its a blinking green light and its time for them to go, but yet they don’t move so the guy behind him sticks his head out and barks at the guy, but the message either isn’t registering in their minds or they really can’t see so they wait until it stops blinking and then there is a war (in most cases).
A lot of people always ask, “where do they get their license from?”. This is a valid question than any other so I managed to do some research and to my amazement what I found actually made sense as to where this problem has derived from.  The Ministry.  When you go to the ministry, we all know who’s behind the desk LOL! When you see them on the road doing their training or their road tests, it just so happens to be a coincidence that there is another Chinese guy/girl who is monitoring them or grading them.  Why is it you never see an Asian guy/girl with someone from another race with them? The only reason that comes to mind is that there can be a language barrier or they are just comfortable with someone who comes from the same place they come from. This is understandable because we think that because the person who is grading us or training us will actually give us a break JUST BECAUSE we come from the same place. 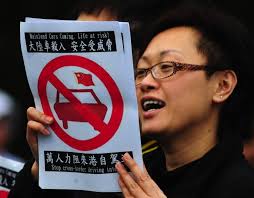 All I am saying is that this is a problem that none of us will be able to explain as to why they are not able to see the signs on the road, take the wrong turns, cause alot of accidents, drive extremely slow or wait at a green light for an extremely long time, either reacting too quickly or not as quickly when driving unless we actually ask one of them. I asked a few of them and they just laughed and simply said that it is a simple human error they make and anyone can do it. I agree, but if the occurrences happen within the same “environment” time after time, I find it questionable if its simply a human error. I spoke to someone and they went as far as saying that if they knew that an individual of chinese descent was to conduct the plane, or even drive a bus, they would reconsider….ain’t that something. 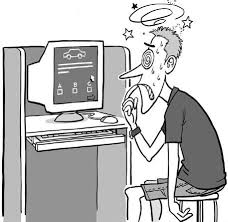 I don’t have anything against the Chinese so don’t get it twisted. I am just stating the truth and what the general public has to say. You may disagree with the things that I have to say and then you may agree, but that’s the whole point of having your own opinion…..right?