Everyone has something that they cherish, they love…something that they are passionate about.  They have foundations for people who have cancer, aids, multiple sclerosis….but what about the people who really matter to society.  In everything we always tend to forget about the “little guys”, the small businesses that are trying to make a living to feed their family or whatever cause they started towards their path to financial freedom. I support every and anyone who has a hustle, something that they have started from the ground up to make money and having that one common goal that we all have which is to GET RICH.

I pity the fool who looks at that lady posted on the corner…..you know who I’m talking about.  That girl down at the corner of Queen & John selling her ass because she’s trying to pay for college.  Or how about that other girl who works just across from her on the other side of the street…Ohhhh yeaahh you know who she is, and they don’t call her Luscious Lips for no reason. She’s out there taking it to the face and in the “back door” with no Vaseline….not because she enjoys it, but because she’s trying to put food on her family’s table.  Now understand that there are many reasons why someone would sell their body and for the majority of the people who are out their on the strip….its a life and death situation.
Imagine having no skills, no education, no experience in a work environment, but you have the ambition to make money. What a better way than selling yourself to the public.  There are billions of people that roam the world and the fact that there is probably over millions in your city alone and depending on how much you’ll be charging for the types of services that you are offering, you can be a millionaire in no time.  One of the major keys to success is how you market yourself and word of mouth is an incredible thing.

Just like the cops, prostitutes risk their lives each and every single day when they are out there on the streets.  They have the risk of meeting someone who may put them in a body bag because no one really knows the whereabouts of this poor soul, so if she or he was missing, it would just be a simple case of “Jon Doe“.  Being in this business can also be risky because you have the risk of your clients either short paying you or not paying you at all. If you want to avoid such mishaps, it would be in your best interest to move on up to escort services.

With the escort services, the person who is in charge has a list of the individuals of their clients. They have their addresses, phone#’s, their IDs and have an idea as to where the couple will be. This way, they have a record of what is going on and if there were any accidents, there can always be a trace as to who the culprit was which would make the job alot easier for the authorities to find who that dirtbag is.
Honestly, think of this profession as customer service. It is something that alot of people want or need in their lives, and with anything that has to do with a service, comes a price and if you don’t like how much the company is charging, you always go somewhere else.  Prostitution is the same way. You are paying for a service and if you enjoy the experience, you go again and again.  Great customer service travels by word of mouth and you won’t just have the satisfaction of helping many others who are seeking the same experience as you did, but you are helping out the prostitute (male or female) to generate enough income to be in a better position in life….you’re probably helping them support their family. 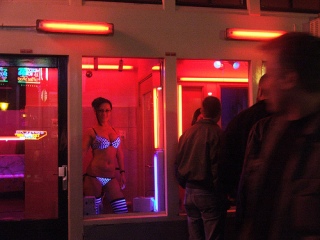 The problem with today’s society is that we are quick to judge and point the finger at someone just because someone is doing something different.  The cops are posing as an “average Joe” looking to catch these hardworking people either performing or soliciting sexual favours and they are taking them off the block one by one.  These cops are acting like they are trying to do society a favour by removing them off the streets, but its the same cops that are sleeping with them and because they are in a position where they don’t have any rights and its illegal, its their word against theirs…what a damn shame.
All I am saying is that we should respect the hustle of a prostitute. They are just like you and me; entrepreneurs, business owners, visionaries.  The only difference is, they chose to sleep their way to the top…I really don’t see anything wrong with that.  If Amber Rose can sleep to the top, why can’t a regular person too?#MuchLove